Two Constitutions In The United States
The 1st Version Was Suspended In Favor Of A Vatican Corporation In 1871
PressCore.ca - 092911

The Congress realized that the country was in dire financial straits, so they made  a financial deal with the devil – international bankers — (in those days, the Rothschilds of London ) thereby incurring a DEBT to said bankers.  The conniving international bankers were not about to lend the floundering nation any money without some serious stipulations. So, they devised a way of taking back control of the United States and thus, the Act of 1871 was passed.  With no constitutional authority to do so, Congress created a separate form of government for the District of Columbia.

With the passage of  “the Act of 1871” a city state (a state within a state) called the District of Columbia located on 10 sq miles of land in the heart of Washington was formed with its own flag and its own independent constitution – the United States’ secret second constitution. 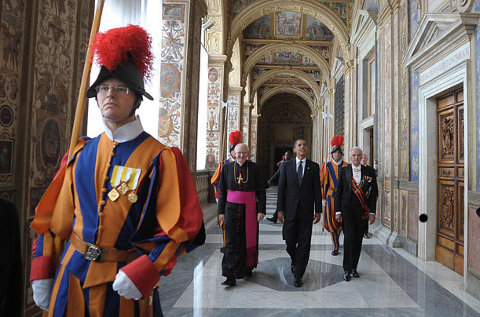 POTUS is the Chief Executive (president) of the Corporation of the United States operating as any other CEO of the corporation — governs w/a Board of Directors (cabinet officials) and managers (Senators/Congress) Obama as others before him is POTUS — operating as “vassal king” taking orders once again from “The City of London” through the RIIA (Royal Institute of Intl Affairs).  The Illuminati (founded by the The Society of Jesus or Jesuits, the largest Roman Catholic Religious Military Order headed by the Black Pope) created the Royal Institute of International Affairs (RIIA) in 1919. The American equivalent to the RIIA is the Council of Foreign Relations (CFR). The RIIA and CFR set up Round Table Groups (based on the King Arthur myths).

What did the Act of 1871 achieve?  The ACT of 1871 put the United States back under British rule (which is under Vatican rule).  The United States people lost their independence in 1871.

THE CONSTITUTION OF THE UNITED STATES OF AMERICA is the constitution of the incorporated UNITED STATES OF AMERICA. It operates in an economic capacity and has been used to fool the People into thinking it governs the Republic. It does not! Capitalization is NOT insignificant when one is referring to a legal document. This seemingly “minor” alteration has had a major impact on every subsequent generation of Americans. What Congress did by passing the Act of 1871 was create an entirely new document, a constitution for the government of the District of Columbia, an INCORPORATED government.

Instead of having absolute and unalienable rights guaranteed under the organic Constitution, we the people now have “relative” rights or privileges. One example is the Sovereign’s right to travel, which has now been transformed (under corporate government policy) into a “privilege” that requires citizens to be licensed – driver’s licenses and Passports. By passing the Act of 1871, Congress committed TREASON against the People who were Sovereign under the grants and decrees of the Declaration of Independence and the organic Constitution.  The Act of 1871 became the FOUNDATION of all the treason since committed by government officials.

As of 1871 the United States isn’t a Country; It’s a Corporation! In preparation for stealing America, the puppets of Britain’s banking cabal had already created a second government, a Shadow Government designed to manage what “the people” believed was a democracy, but what really was an incorporated UNITED STATES. Together this chimera, this two-headed monster, disallowed “the people” all rights of sui juris. [you, in your sovereignty]

The U.S.A. is a Crown Colony. The U.S. has always been and remains a British Crown colony. King James I, is not just famous for translating the Bible into “The King James Version”, but for signing the “First Charter of Virginia” in 1606 — which granted America’s British forefathers license to settle and colonize America. The charter guaranteed future Kings/Queens of England would have sovereign authority over all citizens and colonized land in America.

After America declared independence from Great Britain, the Treaty of Paris, signed on September 3, 1783 was signed.  That treaty identifies the King of England as prince of U.S. “Prince George the Third, by the grace of God, king of Great Britain, France, and Ireland, defender of the faith, duke of Brunswick and Lunebourg, arch- treasurer and prince elector of the Holy Roman Empire etc., andof the United States of America“– completely contradicting premise that America won The War of Independence.

Article 5 of that treaty gave all British estates, rights and properties back to Britain.

It is agreed that Congress shall earnestly recommend it to the legislatures of the respective states to provide for the restitution of all estates, rights, and properties, which have been confiscated belonging to real British subjects; and also of the estates, rights, and properties of persons resident in districts in the possession on his Majesty’s arms and who have not borne arms against the said United States. And that persons of any other decription shall have free liberty to go to any part or parts of any of the thirteen United States and therein to remain twelve months unmolested in their endeavors to obtain the restitution of such of their estates, rights, and properties as may have been confiscated; and that Congress shall also earnestly recommend to the several states a reconsideration and revision of all acts or laws regarding the premises, so as to render the said laws or acts perfectly consistent not only with justice and equity but with that spirit of conciliation which on the return of the blessings of peace should universally prevail. And that Congress shall also earnestly recommend to the several states that the estates, rights, and properties, of such last mentioned persons shall be restored to them, they refunding to any persons who may be now in possession the bona fide price (where any has been given) which such persons may have paid on purchasing any of the said lands, rights, or properties since the confiscation.

And it is agreed that all persons who have any interest in confiscated lands, either by debts, marriage settlements, or otherwise, shall meet with no lawful impediment in the prosecution of their just rights.

It is becoming increasingly apparent to American citizens that government is no longer being conducted in accordance with the U.S. Constitution, or, within states, according to state constitutions. While people have recognized for more than 150 years that the rich and powerful often corrupt individual officials, or exert undue influence to get legislation passed that favors their interests, most Americans still cling to the naive belief that such corruption is exceptional, and that most of the institutions of society, the courts, the press, and law enforcement agencies, still largely comply with the Constitution and the law in important matters. They expect that these corrupting forces are disunited and in competition with one another, so that they tend to balance one another.

Mounting evidence makes it clear that the situation is far worse than most people think, that during the last several decades the U.S. Constitution has been effectively overthrown, and that it is now observed only as a façade to deceive and placate the masses. What has replaced it is what many call the Shadow Government – created with the illegal passing of the Act of 1871. It still, for the most part, operates in secret, because its control is not secure. The exposure of this regime and its operations must now become a primary duty of citizens who still believe in the Rule of Law and in the freedoms which this country is supposed to represent.

See this article and view the reader commentary here

NewsFocus: A very good article, however, I disagree with the assessment that the US was bankrupt after the Civil War, as Lincoln's Greenbacks were created to prevent such a collapse. The Greenbacks were finally withdrawn in 1836 with the Contraction Act, immediately after Lincoln's murder in 1865.

I see in the near future a crisis approaching that unnerves me and cause me to tremble for safety of my country; corporations have been enthroned, an era of corruption in High Places will follow, and the Money Power of the country will endeavor to prolong its reign by working upon the prejudices of the People, until the wealth is aggregated in a few hands, and the Republic destroyed. -Abraham Lincoln, letter to Col. William F. Elkins, Nov. 21, 1864

Two national governments exist; one to be maintained under the Constitution, with all its restrictions; the other to be maintained by Congress outside and Independently of that Instrument. -Supreme Court Justice Marshall Harlan (Downes v. Bidwell, 182, U.S. 244 1901)

The District of Columbia Act of 1871

The United States Is A Corporation